A picture of Wildcard in Mod Studio.

Wildcard is an Elite Mod whose appearance resembles that of a playing card.

He appears in the course Island Dash. A message at the end of the pre-race intro says that he's probably a creature of vampire descent, hence his large canine teeth. He is favorited by many fans, and is number 3 in the B.I.F.F list, only topped by Espresso and Nato, later by Espresso and Tag. Gary Reasons even calls Wildcard a track-favorite.

There was a rumor that was later proved to be true that he Sideswiped his own mother off the freeway, revealing he has a cocky & rash nature. The pre-race cut-scene of Island Dash shows Wildcard Sideswiping Tag out of his spot, furthering evidence of his charactor.

In his Grudge Match, you have to beat him 1-on-1. It is considered amazing to get him because the player needs 4000 Airtime Points, which is considered very hard.

Wildcard and all of the Elite Mods.
Wildcard Introduction.jpg 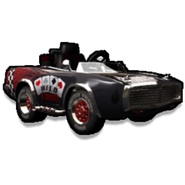 Wildcard's Kart
Add a photo to this gallery
Retrieved from "https://modnationracers.fandom.com/wiki/Wildcard?oldid=10412"
Community content is available under CC-BY-SA unless otherwise noted.