Richard Short is the owner of Conservative Motors and the true main antagonist of the game.

Richard Short is the owner of Conservative Motors and the uncle of Tag. He is very competitive and evil, sometimes even going as far as destroying Tag’s kart to get him to sponsor for his company.

Richard Short's goal is to get Tag to sponsor for Conservative Motors.

Uncle Richard tries multiple times to get Tag to sponsor his company, however, with the guidance of The Chief who insists that Tag should not race for CM Richard has no luck with getting him to sign a contract. He then gets the idea to plant a bomb in Tag's Kart. After the Drift Paradise race (or before it in the PSP game) when The Chief is tinkering with Tag's kart, it explodes, destroying his boom box as well as knocking him out and he enters a coma. This drives Tag to sign his contract so he didn't have to sell Mom's Paint Shop to stay in the MRC, and continues racing with a different outfit and kart while being sponsored by Conservative Motors.

While Tag is sponsoring Conservative Motors, Richard acts as Tag's chief, taking over his usual position of assisting Tag with radio contact. In the PSP game during the time the Chief is knocked out and in a coma, there is no pit dialog.

After a few races, Mother complains that Tag racing for CM is not good, when the Chief wakes up from his coma. He is shocked that he has signed a contract with CM but respects that he still managed to race after the setback. He then reveals that he lied about retiring due to his Boom Box being destroyed and gives him his old Boom Box so Tag can race without being sponsored by CM.

Later on after hearing that Tag won the Grand Tour from text messages from his assistant, Richard claims that since Tag signed his contract, despite him abandoning it after a few races, Conservative Motors had won as well. He then suddenly gets arrested by the ModNation Police Department, after they had discovered that he planted his bomb on Tag's Kart due to finding his finger prints. He has not been seen since, and it is unknown what happened to his company.

Tag declines Uncle Richard's Contract by orders of the Chief.

Richard Short on the right side. 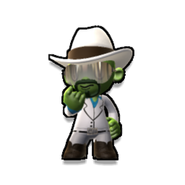 An icon of Richard Short.

Richard's billboard at Flaming Jumps.
Add a photo to this gallery

Retrieved from "https://modnationracers.fandom.com/wiki/Richard_Short?oldid=10836"
Community content is available under CC-BY-SA unless otherwise noted.