A picture of Jez.

Jez is a female Elite Mod in ModNation Racers and is the champion of the Range Tour. She first appears in the Track Drift Paradise, and she appears in all the races of the Grand Tour.

Jez and Shadow are the only female Elite Mods (along with Astro Kitty in the PSP version).

In her introduction in the Drift Paradise Track, Gary Reasons called Jez "not the nicest racer." To defeat Jez, you must get a higher score than her in her Grudge Match on Drift Paradise.

At the pre-race cutscene of Fracture, a group of sheep suddenly appeared and blocked off the Start Line. Jez forced them to move away to allow the race to start.

Jez is considered to be very Competitive and Cocky

It appears that Jez and Tag have some kind of mischief chemistry with each other. Evidence of this is shown in the Grand Tour, where Tag and Jez are found interacting with each other, in forms of accidents or pranks.

This is shown in the pre-race cutscenes of Drift Paradise, Breakwater, Rumble Jungle, Citadel Heights, and Mt. Pain.

Jez has purple skin, pink hair, eyes with cyan eyeliner, and a mouth similar to that of Aloha. She also wears a standard racing suit with floral decals.

Jez and all of the Elite Mods. 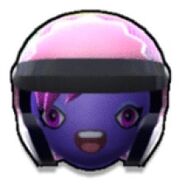 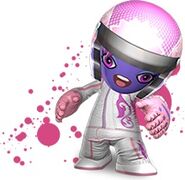 Jez.
Add a photo to this gallery

Retrieved from "https://modnationracers.fandom.com/wiki/Jez?oldid=10792"
Community content is available under CC-BY-SA unless otherwise noted.