Conservative Motors (or CM for short) is a kart company owned by Richard Short, Tag's uncle. It is most likely ModNation's equivalent to a typical economy car company in real life, having made karts known to be "bland and tasteless".

The company was owned by Richard Short before he got arrested for the bomb that destroyed Tag's Kart to force him to sign his contract at the end of the Career Mode. It is not known who currently owns CM.

The company's motto, "We put the ordinary in extraordinary", is a self-reference to describe their bland taste in karts, and they seem to have little interest in their motorsports development. The B008S Sedan is seemingly their only production model, and is only available in cream, and pale blue.

The company is shown to have a bad reputation in the Grim Tour, as Tag‘s fans are shown to boo at Richard's Assistant replacing Tag on a hand with CM. 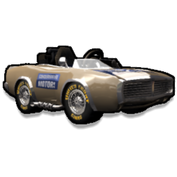 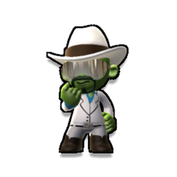 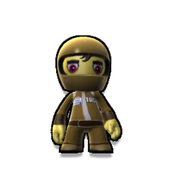 Tag in his CM outfit (Carefully remade by nick96-18-)
Add a photo to this gallery
Retrieved from "https://modnationracers.fandom.com/wiki/Conservative_Motors?oldid=10837"
Community content is available under CC-BY-SA unless otherwise noted.