Biff is one of the MRC's commentators, along with Gary Reasons.

Biff Tradwell is a Mod with blue skin, hazel eyes, a black moustache and black hair. He also wears a black tuxedo and red and white underpants, instead of normal pants.

Biff Tradwell works for the MRC as one of the main commentators. He has a big ego and constantly thinks how awesome he is, and constantly insults Gary Reasons most of the time. For example, he is notable for calling Gary's last name other than Reasons, such as Raisins.

Biff (left) with his partner Gary. 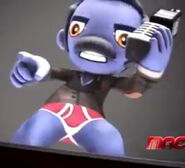 Biff is shown to wear red underwear and no pants in this picture.
Add a photo to this gallery
Retrieved from "https://modnationracers.fandom.com/wiki/Biff_Tradwell?oldid=10818"
Community content is available under CC-BY-SA unless otherwise noted.