Tag is the main protagonist of ModNation Racers. He is classified as an Elite Mod, and you race with him as the default character.

Jez, one of two female Elite Mods, seems to have mischief chemistry (maybe even rivals), as in the Grand Tour, they pull pranks on each other. Examples are Jez bumping Tag out of place in the Mt. Pain pre-race cutscene and Tag bumping Jez at the rear in Breakwater as he waves at the crowd. His interests involve spray-painting and racing. His mother owns a paint shop, and a friend of her's, the Chief, directs him in races. The only exception is for the time where Tag's Crew Chief gets injured from an explosion and Uncle Richard coaches him (PS3 version only). His uncle, Richard Short works at Conservative Motors and he turns out to be the one who caused the Chief's accident, so Tag would sponsor him.

Tag wears red and black goggles on his head (on both sides says UFG), he has purple eyes and wears a grey shirt and pants with paint on them. He wears two rings on his fingers (one on his thumb on his left and one on his index on his right). He also wears lightning shoes.

A picture of Tag racing in Alpine Drop (but in the first cutscene, which may be incorrect. If this is not an error, then Tag has some racing experience before he entered the MRC.) 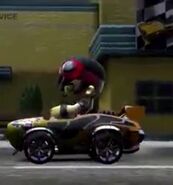 Tag's Kart.
Chase Mod.jpg
An early version of Tag, Chase. Note the base color is the default for the skin Tag is using.
このギャラリーに画像を追加